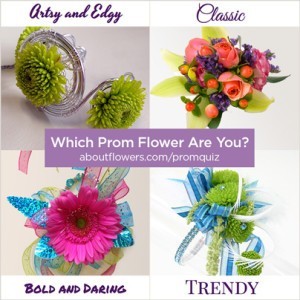 SAF’s Prom Resource Center provides members with suggested social media messages and new graphics such as this one to capitalize on its latest public relations program.

Prom is a major rite of passage for teens, and often the first time they buy flowers from a local professional florist. SAF is doing its part to get teens excited about prom flowers and finding a local florist with a new interactive quiz and social media campaign. To help members capitalize on the quiz and make their prom business top of mind among consumers, SAF’s Prom Resource Center provides members with 36 suggested messages and seven new graphics to post on social media.

“It’s no secret teens love to share their opinions and participate in social media engagements,” said SAF Vice President of Marketing Jennifer Sparks. “The Prom Quiz, suggested social media messages and graphics make it easy for busy florists to promote their prom business in a fun, creative way to teens and their parents.” Read more.

The interactive quiz on SAF’s consumer website, AboutFlowers.com/promquiz, asks visitors nine questions about their personality, style and prom plans. Upon completion of the quiz, users receive their results — one of four “prom flower personalities,” along with photos and advice for styling flowers for prom attire and assistance in finding their local florist.

Prom flower personality categories include Classic, Trendy, Bold & Daring, and Artsy & Edgy. Quiz takers whose answers run the gamut receive an “Eclectic” result with photos and advice to spur their interest. Users are encouraged to share their results on social media, further amplifying and broadening the quiz’s reach.

“If your time is short, just follow SAF’s lead by sharing our prom posts from Instagram.com/About_Flowers, Facebook.com/AboutFlowers and Twitter.com/FlowerFactor,” Sparks said.

SAF is running paid promoted posts throughout April targeting teens on Instagram and Twitter, and their moms on Facebook. It’s working: In just the first 24 hours, SAF’s paid Instagram post alone experienced more than 3,000 click-throughs to the Prom Quiz. SAF will continue to promote the Prom Quiz on SAF social media channels throughout May and into early June.

The SAF Prom Quiz program is possible thanks to funding from Asocolflores, which has also funded SAF’s 2016 Women’s Day PR program, as well as social media efforts for the 2015 Petal It Forward program and production of the consumer video highlighting the New York City event.