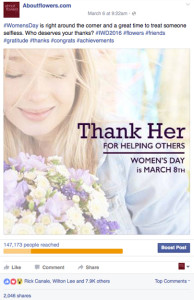 During the week leading up to Women’s Day, SAF’s Facebook.com/AboutFlowers generated 270,419 impressions and 21,283 engagements with likes, shares and comments.

Hundreds of thousands of consumers now know more about Women’s Day, thanks to the Society of American Florists’ public relations and social media campaigns. Those efforts helped raise awareness of the observance and the idea that flowers are the perfect gesture to recognize women.

During the week leading up to Women’s Day (March 8), SAF’s Facebook.com/AboutFlowers  generated 270,419 impressions and 21,283 engagements with likes, shares and comments. Heartfelt posts ranged from expressions of gratitude to the industry for raising awareness about Women’s Day, to positive mentions about flowers to users publicly naming women they wanted to honor or recognize.

“Even though March 8 was yesterday, we’re still seeing people engage with our Women’s Day social media posts,” said SAF Vice President of Marketing Jennifer Sparks. “This means our reach continues to grow, educating more consumers about Women’s Day and the importance of flowers.” 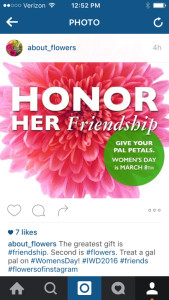 SAF focused on a strategy of women giving to women and employed new graphics to carry the flower message on social media, including Instagram.com/about_flowers.

SAF strategically promoted five key Facebook posts to expand its reach beyond its followers and prominently featured Women’s Day on its other consumer channels, including aboutflowers.com,  the Flower Factor blog, Twitter,  Instagram and Pinterest.

SAF contacted a variety of media outlets to generate news coverage about Women’s Day, including national women’s magazines, digital media, and daily newspapers and other short-lead publications. Just prior to Women’s Day, SAF made flower deliveries to key national and local media.

“A couple of news reporters even thanked us on social media,” Spark said, “which in turns amplifies the Women’s Day flower message to even more consumers.”

“These ‘mommy’ bloggers have a strong following among female consumers,” Sparks said, “a key demographic to reach with the message that giving flowers is a loving gesture to recognize or celebrate a deserving mother, sister, daughter, colleague, mentor or friend in your life for Women’s Day.” 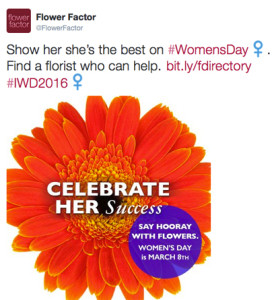 SAF’s campaign, including this tweet by Twitter.com/FlowerFactor, encouraged consumers to go to the NationalFloristDirectory.com to find a florist.

In late January, SAF distributed a digital press release to online news publications nationwide. It heralded SAF’s Emotional Impact of Flowers Study  that demonstrates a gift of flowers makes people truly smile and urged consumers to talk to their florist for Women’s Day gift suggestions. To date, the online press release has garnered 818 placements on national publications such as Yahoo Finance, and on local outlets such as Florida Times Union, Arizona Republic, and Pittsburgh Post Gazette, with a potential readership of 76 million.

“Around the world, many people give flowers and other small gifts to their mothers, wives, grandmothers and daughters, as 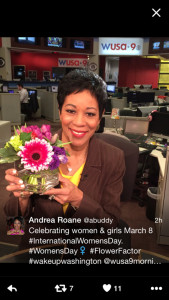 SAF provides members with promotional ideas and resources at safnow.org/WomensDay.

“Thanks to Asocolflores’ generosity and leadership in industry promotion, the floral industry can continue to capitalize on new opportunities, like Women’s Day, to keep flowers top of mind among consumers as the perfect gift for communicating appreciation and admiration,” Sparks said. 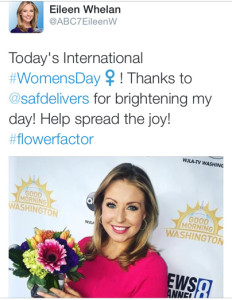 As an extension of its Women’s Day program, SAF is funding a $2,000 scholarship for female high school seniors or college students.

“Rather than approach Women’s Day solely with a ‘buy flowers’ message for what is a non-commercial holiday, this program demonstrates how the floral industry supports women and, we hope, why flowers are a symbol of acknowledgement for women’s success,” Sparks said.

More than 600 applicants submitted essays on how they turned a challenge into a growth opportunity. SAF partnered with the American Business Women’s Association to promote the scholarship, and will announce the winner by June.