Floral Industry Members Look Ahead to 2016, with Some Hesitation 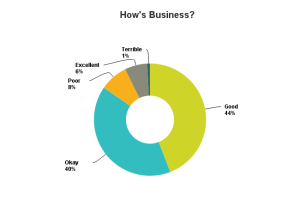 As 2015 came to a close and the New Year settled in, these were just some of the weighty concerns floral industry members were grappling with, according to results from a year-end, fourth-quarter survey conducted by the Society of American Florists.

Oh, yeah: And the prospect of a Sunday Valentine’s Day on a holiday weekend, too.

Overall, 44 percent of respondents to the survey — which queried retailers, growers and wholesalers, importers and suppliers — said business was good at the start of 2016, and 41 percent said they were optimistic about business this year.

Still, while no one is comparing the current economy to the disaster zone surrounding 2008, the mood among many industry members seems centered on tempered expectations and wait-and-see attitudes. It’s as if a whole lot of people are saying, “Things are okay right now, but …”

This week, we’ll take a more in-depth look at those results, focusing in on the key challenges retailers, wholesalers, suppliers, importers and growers face, and the ways respondents predict their businesses might change in 2016.

A handful of respondents noted trepidation over a slow start to the New Year.

“The local economy is challenged,” a florist in Massachusetts explained. “[During the] first two weeks of January, [we were] down by 60 orders from last year.”

“January sales are slower than anticipated,” a Pennsylvania florist agreed. “We are off so far a good 20 percent.”

The state of business among retailers varied by region and size, although most respondents said things are good or okay (respondents could also offer more enthusiastic responses—excellent — or more dismal — poor and terrible — but the majority stuck with good and okay).

Perhaps not surprisingly, the largest shops, those with $1 million or more in sales, appear to be feeling the best: 52 percent of those respondents said business is good. (Thirty-two percent said it is okay.) By comparison, among retailers with:

And, florists in the Northeast appear more bullish than retailers in other parts of Canada and the U.S., particularly those in the American South

Beyond retailers, 50 percent of growers said business is okay and 43 percent classified it as good. Only 7 percent said it’s bad

The Year Ahead: Mostly Sunny with a Chance of an Apocalypse (Kidding. Kidding.) 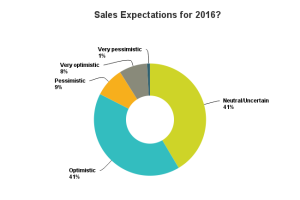 Record low oil prices, for example, may be good for some consumers and business owners, but in areas that depend on the oil and natural gas industry, crashing prices — from $100 a barrel to less than $30, at press time, according to CNBC — make for wary retailers.

“Our area depends on the oil and gas industry,” said one Texas retailer. “[With] production dropping and rising unemployment, [there’s] not much room for optimism.

Steep drops in the stock market, and the surrounding media coverage, are not helping a jumpy public feel confident either, noted a number of responses.

“With the stock market as it is, I don’t want to even think what could happen with sales to my business,” worried a retailer in Pennsylvania.

“I think [people] are still a little trigger happy on reactions, pulling in spending [based] on negative news,” added a Minnesota florist. “That [trend] will affect our luxury business model.”

Also damaging? The news that high profile national businesses are suffering. An Oregon florist pointed out, both Wal-Mart and Macy’s have recently announced significant store closings around the country.

And, in case you’ve been living (blissfully) in a cave for the past six months, this year brings a presidential election — and an election season that’s been anything but standard. As one wholesaler based in California explained, particularly when paired with other factors, “[the] election year, stock market uncertainty [and] oil prices [are] adversely affecting segments of the economy,” he said.

(In fact, when SAF surveyed members at the end of 2011, before the last presidential election, 46 percent of respondents felt optimistic heading in 2012, 29 percent said they were neutral, 16 percent were pessimistic, and 9 percent were very optimistic.)

Florists in Canada pointed to another worry: the exchange rate between the two countries.

“The U.S. dollar is creating a big strain on our costs, as we are experiencing huge price increases due to the Canada-U.S. exchange rates,” one retailer out of Toronto noted.

Casting their eyes forward to February and Valentine’s Day, few industry members saw much hope in the mega holiday, situated as it is on a Sunday and long weekend. (Read more about Valentine’s Day predictions.)

“The overall economy and stock market woes combined with a Sunday Valentine’s create headwinds that will be tough to overcome,” explained a Tennessee florist, who also lamented a “continuing slide” in sympathy sales and the “relative generational disinterest” in flowers among 25- to 49-year-olds. 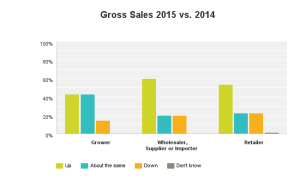 Zooming in beyond gross sales for the year, compared to the fourth quarter of 2014, 2015 fourth quarter sales were up for 47 percent of all respondents (growers, retailers and wholesalers, suppliers and importers combined), down for 28 percent and about the same for 24 percent.

Other interesting findings include: 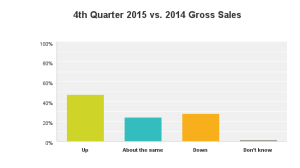 Among those respondents who experienced a decrease in fourth quarter sales in 2015:

Among those respondents who experienced a sales increase in fourth-quarter sales:

Among those respondents who said net profits were down from the same quarter last year:

Among those who said net profits are up from the same quarter last year:

“Our overhead costs are going up,” said a California florist, noting that the state has raised its minimum wage to $10 per hour. “Our city is raising [the minimum wage] again in January 2017.”

Rules and regulations also presented challenges to a nursery grower in California, who noted, “we are required to cut back on our water use due to the drought in California. We had to cut a small percentage of production in order to meet our required cuts.”

Managing inventory and keeping freight and transportation costs in check poses another challenge, said a grower headquartered in Florida.

And, health care. Oomph. Health care, said a Pennsylvania florist. “Even though we are below the threshold for Obamacare, we are still spending a considerable amount of time on our shop health care,” time — and money — no doubt, he’d rather be putting elsewhere 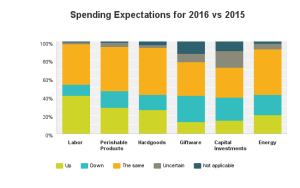 The SAF survey asked all respondents to weigh in on how they expect their spending in key areas to line up in 2016, compared to 2015:

Looking at the same series of questions by segment:

One spending area you’ve probably noticed is missing: Labor. The tricky business of finding qualified help and keeping it came up throughout the survey.

Throughout the industry, one message resonated: This challenge is not going away. 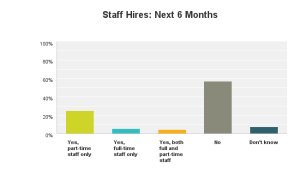 “The biggest challenge is to find good staff to support our continuing growth,” said a rep from a Colombian grower.

The nursery grower in California agreed. “We anticipate a shortage of production labor again this year,” she said.

Many industry members have no plans to add to staff in the short-term:

In addition to worries over the economy and consumer spending, new minimum wage laws are behind at least part of the resistance to new hires for some respondents.

“Massachusetts has a new minimum wage law and a paid sic leave law that will cause me to be very cautious in regards to new hires,” said one Massachusetts retailer, adding that the prospect of higher salaries is a possibility. “Even though I don’t expect to raise compensation levels across the board, I will do so on a case-by-case basis if I feel it is warranted.”

The Year Ahead: Food for Thought

Even with challenges looming, many respondents expressed optimism for the coming year in anecdotal responses, particularly once the challenge of Valentine’s Day is out of the way.

“If we can get through [Valentine’s Day] without dropping more than 5 percent, we are in a good position to grow against last year’s weak numbers in the first two quarters,” said a Michigan florist.

A florist in Ohio predicted a 5 to 10 percent growth at her shop as a conservative estimate, based on the “last 12 months of trending.

Location certainly plays a role. A florist in Kentucky expressed excitement over a new location, and the potential for growth.

“It has been remarkable to see a difference in walk-in,” she said. “We have a completely different vibe in this location,” even though it’s situated near the previous site.

In Michigan, one florist celebrated the revival of corporate work in metro Detroit. Auto suppliers “are booming,” he said. “We had a number of corporate holiday party orders that we have not gotten since 2008.”

A New York florist noted his business is “trending more and more toward weddings, parties, corporate events and sympathy,” and away from everyday work. That’s okay with him. “Much better margins on this type of business, [and it’s] easier to buy and forecast needs for product and labor.”

And, for at least one florist in Florida, “2015 was the year we finally caught up to where we were when the recession hit in 2008.”

That’s good news, he said, and that’s why he’s not worried about a potential drop this year. After all, sometimes it’s impossible to read the tea leaves.