After a Cheery Christmas, Florists Worry about Valentine’s Day Drop 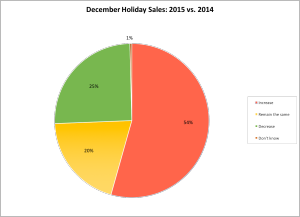 More than half of florists say 2015 December holiday sales were higher than 2014 returns.

Among the 54 percent who saw an uptick, the increase was modest but noticeable. Thirty percent of respondents to a Society of American Florists (SAF) post-holiday survey said they experienced an increase between 1 and 5 percent. Twenty-two percent of respondents said the increase was between 6 and 10 percent and 10 percent classified it as between 11 and 15 percent.

Here’s an in-depth look at some of the returns from SAF’s December Holidays survey. See “February 14: Tempered Expectations” for the industry’s take on the prospects for the 2016 holiday, which falls on a Sunday.

Some variation seems to exist depending on business size:

The location of each business also affected responses: 56 percent of self-described urban shops saw an increase in sales, which was about on par with the 57 percent of suburban shops who noted similar positive results. Meanwhile, 52 percent of small town shops and 50 percent of rural shops reported an increase. 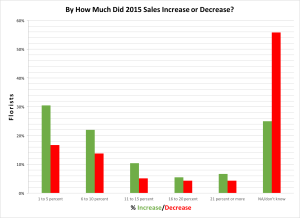 Among those who saw a drop in sales, 56 percent said they weren’t sure by how much sales tapered off, and 17 percent said the decrease was between 1 and 5 percent; 14 percent classified it as 6 to 10 percent and about 13 percent said it was 11 percent or higher. 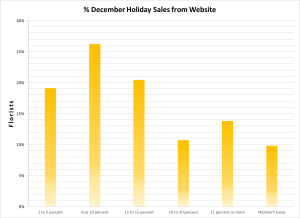 Compared to last year, 56 percent of respondents said promotions stayed about the same. About 36 percent said they increased their efforts and 5 percent scaled back.

The average sale for the holiday, according to all respondents, was about $67.

Fifty-three percent of respondents did not offer holiday décor services. Among those who did, 54 percent said the segment stayed the same and 31 percent saw an increase. Fifteen percent said their décor business dropped.

Only 39 percent of respondents held a holiday themed open house in 2015. About half of respondents ran an after Christmas sale. (According to write-in sales, the vast majority of these sales involved slashed prices of 50 percent off or more.) 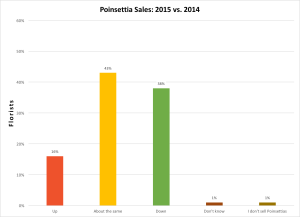