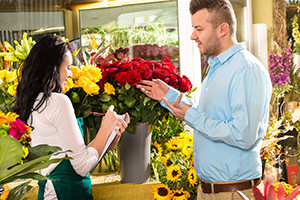 Tempted to write off Valentine’s Day 2016 already? Thinking the holiday will only disappoint, situated as it is on a Sunday and long holiday weekend?

New research on consumer spending suggests the weekend event could be a bigger deal than conventional wisdom within the floral industry promises.

In a recently released report on their U.S. Consumer Floral Tracking Survey, Thomas L. Prince, Ph.D., and Timothy A. Prince, Ph.D., of Prince & Prince Inc. in Columbus, Ohio, found “a slight increase in consumer floral purchasing for Valentine’s Day when the holiday falls on the weekend, compared to weekday holidays.”

What’s more, “the increase in weekend Valentine’s Day floral purchasing is largely driven at both ends of the household income ladder, among more mature floral-buyer segments (age 55 and older), and among single-male households,” according to Prince & Prince. “While younger-aged households (under age 35) still show strong likelihood to purchase floral products for

The results run counter to responses florists put forward recently, after the Society of American Florists surveyed its members about their holiday expectations: Sixty-eight percent of respondents to the SAF December 2015 Holidays and 2016 Valentine’s Intentions survey said they expect a decrease in Valentine’s Day sales this year. About 21 percent are planning for flat sales. Only 6 percent predict an increase. (The last time the holiday fell on a Sunday, in 2010, nearly 60 percent of surveyed florists reported a drop in sales.)

Highlights of the findings include:

Add it Up. The 2010 purchasing data suggests an increase in consumer floral purchasing for Valentine’s Day (about two percentage points higher) when the holiday falls on the weekend. While the increase in purchasing is considered small in terms of the percentage of floral-buying households, in terms of aggregate spending, a weekend Valentine’s Day likely translates into an estimated $130 million in additional floral spending nationwide.

High and low. Households with annual income of $25,000 or less, and those households with annual income of $75,001 to $100,000 showed heightened floral purchasing for the weekend Valentine’s Day in 2010, compared to other survey years when the holiday fell on weekdays. This translates to about 10 percentage point increase for each group attributed to the weekend Valentine’s Day.

Mature buyers. While the youngest households (age under 35) show the highest incidence of floral purchase for Valentine’s Day across all survey years, the more mature consumer segments (age 55 to 64, and age 65 and older) show heightened floral purchasing for Valentine’s Day 2010, when the holiday fell on the weekend. (The purchasing gain attributed to a weekend Valentines Day for these two age groups is modest — around 5 percentage points each.)

Read the full report, which was sponsored by Smithers-Oasis North America.