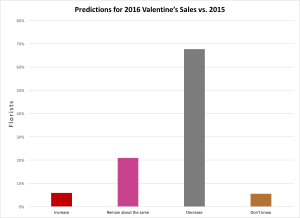 Next month, Valentine’s Day falls on a Sunday — historically, a low-performing day for the holiday — and a holiday weekend.

That positioning pits florists against all the usual competitors (inside of the industry and outside of it) and makes the idea of a romantic get-away all the more appealing to some consumers.

Florists responding to the SAF December 2015 Holidays and 2016 Valentine’s Intentions survey seem to be preparing for a drop-off in sales compared to last year (when the holiday fell on a Saturday). Sixty-eight percent of respondents said they expect a decrease in Valentine’s Day sales this year. About 21 percent are planning for flat sales. Only 6 percent predict an increase. (The last time the holiday fell on a Sunday, in 2010, nearly 60 percent of surveyed florists reported a drop in sales.)

Among shops with less than $300,000 in annual sales, 54 percent expect a decline in 2016 Valentine’s Day sales and 20 percent said sales will likely be flat. About 12 percent predict an increase. Looking at the info in more detail:

When asked to self-identify their location, suburban shop owners seem slightly more pessimistic than their counterparts in smaller and larger areas: 74 percent of those respondents are planning for a decrease, compared to 65 percent of urban respondents, 66 percent of small town respondents and 58 percent of rural respondents.

Other highlights from the Valentine’s Day portion of the survey:

On average respondents plan to charge $85 for one dozen long stemmed arranged roses and $65 for a dozen unarranged. This is in keeping with results from 2015, when respondents to a post-holiday survey reported charging on average $84 for a dozen arranged long-stem Valentine’s Day roses and nearly $67 for a dozen unarranged long-stem roses. Overall, the average purchase amount per transaction on Valentine’s Day last year was about $72.

Nervous about the Sunday event this year? Don’t give up without a fight. SAF members have tons of resources available to them at safnow.org, including web banners and social media graphics, planning tools and tips and best practices for scoring high profile media placement in the run-up to the holiday.