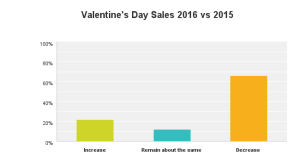 Sunday of a three-day weekend: Good for brunch. Great for lounging in pajamas or binging on Netflix. Lousy for a floral holiday.

That seems to be the feeling among many respondents to the Society of American Florists’ post-holiday survey. Two-thirds of those respondents (66 percent) said their sales dropped this year, compared to 2015, when the holiday fell on a Saturday.

Feeling miserable (or taking comfort in good company)? Those bleak results may not be the full story. After all, historically, Sunday is a challenging day for florists and, paired as this holiday was with President’s Day and the long weekend, the deck was stacked against the industry. 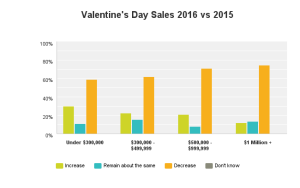 Comparing results to last year’s holiday may also be unrealistic, say florists who experienced a strong holiday in 2015. (Not everyone did, of course—and a Saturday holiday isn’t ideal either — but according to a post-holiday survey last year, 37 percent of respondents saw a sales increase, compared to 2014.) Keeping expectations in check this year was key, they insist.

“While sales were down compared to 2015, they fell with the predictions of where [we thought] they would be,” said one calm and collected florist in Massachusetts — echoing a sentiment many expressed.

When respondents compared this year’s results to returns from 2010 (the last year the holiday fell on a Sunday), the numbers improved, with 36 percent of all respondents reporting a sales increase over their returns from six years ago. 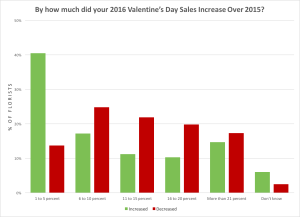 Digging into the survey results, and segmenting it by business size, one lesson becomes clear: Bigger businesses weren’t insulated from the sales drag this year. In fact, they seem to have been hit harder.

Among respondents with $1 million or more in annual sales, for instance, 75 percent experienced a decrease. About 71 percent of those with between $500,000 and $999,999 saw sales drop.

Pulling back and comparing each of these segments to 2010, some variations remain; however, across the board, the results look much better than the 2015/2016 comparisons: 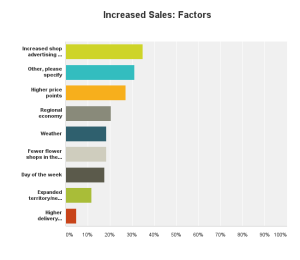 (*Remaining respondents in each section either did not know how sales compared to results in 2010 or they were not operating their business six years ago.)

The Good: Florists with Sales Increases

Another factor on that list? Increased shop promotions and advertising.

Indeed, respondents who increased promotions seemed to fare better than those who kept them on par with previous years or reduced them, with 30 percent of this group reporting a sales increase this year (compared to that 22 percent figure among all respondents).

About 17 percent of respondents with sales increases also included the day of the week as a positive variable — a factor that, according to write-in, anecdotal responses allowed some florists to spread out deliveries and schedule staff to avoid overtime.

“Customers ordered over a longer [time] span, starting on Thursday,” noted one Pennsylvania florist. “Normally, [we] have to talk them into ordering that early.” 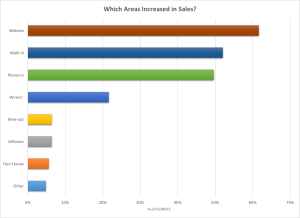 As a number of SAF volunteer leaders also noted, veteran florists approached this year’s holiday with tempered expectations and lots of planning.

“We were well prepared for Sunday, and the staff could focus on each customer who came in,” explained one Massachusetts florist. The extra time, and extra-touch customer service, helped. “Most sales resulted in an add-on purchase,” she said.

In Maryland, a florist echoed that sentiment, writing, “[our] average order was up,” thanks to more “consistent selling of add-ons.”

(Chocolate, by the way, was a hot add-on item among respondents: 57 percent called the classic and delicious complement to flowers their most popular non floral gift item, followed by greeting cards, plush, balloons, gift baskets and, finally, candles.)

Respondents said their “secrets” for success were often just examples of old fashioned hard work, preparedness and, often, experience put to good use.

“I’m certain that our success was because the sales training we did,” said a florist in upstate New York. “We anticipated the lower amount of transactions, but through great salesmanship”— and strategic sales incentives — “we were able to increase our bottom line.” 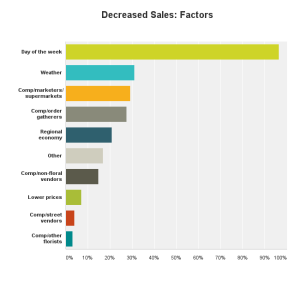 The Bad: Sales Drops — and Reasons (Beyond Sunday) Behind Them

Many florists noted that, with local schools closed on President’s Day, customers hit the road, and didn’t look back.

“Our schools were out and families left town for break,” said a Georgia florist — describing a tough scenario that many others around the country also articulated.

Also challenging. Frigid weather in parts of the country: 31 percent of florists with decreased sales said weather was at least partly to blame.

“It was bitter cold in Pennsylvania,” noted one respondent. “[That] might have kept some of our walk ins home. We typically do not wrap all of our product, but since the temps warranted wrapping, this slowed down our processes a bit, as well as adding extra labor and material costs. Deliveries were affected since product could not be left, and drivers had to take extra precautions with the product.”

Other factors included competition from mass marketers and supermarkets (30 percent); competition from order-gatherers (28 percent) and regional economies (21 percent), among other variables

“Sales are always soft in an election year,” wrote one florist from Arizona. (She isn’t alone in her assessment — but the year still could end strong, said John Canally, chief economic strategist at LPL Financial, who told U.S. News last December that elections can affect spending and the stock market. “There’s been a fourth-quarter rally in every election year since 1950 — except in 2008, and that was largely because we were in the Great Recession.”) 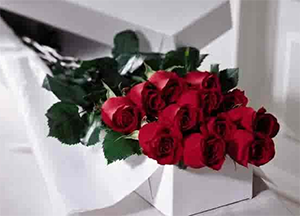 Florists charged $65, on average, for a dozen unarranged long-stemmed roses, and $83 for a dozen arranged roses.

The average price for a dozen arranged long stemmed roses came in at about $83, or $4 higher than respondents’ average price for the same design on a non-holiday. For a dozen unarranged long stemmed roses, respondents charged $65 on average, compared to $51 for those flowers on a non holiday. (Those numbers are roughly equivalent to figures from recent years.)

Other points to ponder about this year’s holiday:

Popular methods of promotion for the holiday included the following:

Florists who used social media said they employed a combination of communication tools — including promoted posts on Facebook and Google ads — to get their message to consumers.

Several florists commented that strong visual merchandising, often with a very simple message (ahem, “We’re OPEN on Sunday!”), helped them stay top of mind. Solutions didn’t have to be high tech to be effective. “We used a sandwich board outside to show we would be open Sunday,” said a Virginia florist, who noted the sign also seemed to help increase sales and generate excitement on Saturday.

Lots of florists wrote about joining forces with local food vendors, etc., sweetening deals (sometimes literally) with cakes and cupcakes from a specialty bakery in upstate New York, heart-shaped pizzas in Michigan, and a coupon for a free pint at a local pub for orders placed by Feb. 5 in Minnesota.

Other promos florists wrote in to tell us about: partnerships with schools, sports teams and local nonprofits.

“We do a ‘delivery fundraiser’ with local groups,” explained a California florist, adding that the initiative is a win-win because news crews almost always “ride around with the drivers.” The shop ends up “getting a lot of good PR for it.”

Speaking of which, about 14 percent of respondents noted success with public relations and media outreach.

That’s a relatively small number that could drive SAF Chairman Shirley Lyons, AAF, PFCI, of Dandelions Flowers & Gifts in Eugene, Oregon, a little bonkers. Lyons sent press releases about the holiday to three local TV stations on the morning of Feb. 12. Her outreach paid off: All three stations came to the store. “It pays to send a press release, and florists should always do so,” said Lyons.