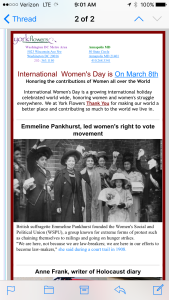 York Flowers wrote an email about a few women with remarkable contributions to pique customers’ interest in Women’s Day.

Creating awareness is a big part of Women’s Day marketing. Although the holiday started in 1909, it’s still relatively unknown in the United States.

The email message opened with the following copy:

International Women’s Day is March 8th
Honoring the contributions of Women all over the World.

International Women’s Day is a growing international holiday celebrated world wide, honoring women and women’s struggle everywhere. We at York Flowers thank you for making our world a better place and contributing so much to the world we live in.

You could take a similar approach with a blog post, or break up the content to highlight a different woman a day on Facebook and Twitter. Consider including a mix of historical figures and local luminaries (remember to tag them in your posts!). For more engagement, ask fans to nominate a woman who is important to them and turn it into a contest.