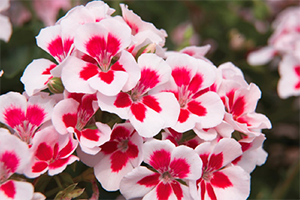 Continuing the strong emphasis on collaboration and communication between the floral industry and the Animal and Plant Health Inspection Service (APHIS), SAF’s senior director of government relations Lin Schmale was a featured speaker last week at a two-day educational session hosted by APHIS, training new inspectors to participate in the ongoing, successful geranium certification program.

“Any offshore farm wishing to export geranium cuttings requires certification and an annual APHIS inspection, so having a cadre of inspectors familiar with industry practices is very important,” Schmale said.

Since 2002, SAF has worked with APHIS and the offshore producers of geranium cuttings to establish and maintain the program, which is based on industry production practices. The accidental introduction into the U.S. in 2003 and 2004 of Ralstonia solanacearum, Race 3, Biovar 2, a serious quarantine disease of potatoes that causes considerable economic damage to the geranium industry, heightened the program’s importance. No subsequent introductions have occurred.

In addition, over the past several weeks, SAF has continued to work with APHIS on Farm Bill funding. The current Farm Bill increased funding of a critical plant pest and disease research program from the previous $50 million annually to $62.5 million. It continues to be strongly supported by SAF and AmericanHort as partners in the Specialty Crop Farm Bill Alliance.

SAF and AmericanHort also continue their participation in the APHIS and National Plant Board-led effort to build a new approach to nursery-greenhouse certification. The Plant Board, made up of the states’ plant regulatory officials, is working with industry to build Systems Approach to Nursery Certification (SANC).

“This is a long-term effort to recognize greenhouses and nurseries using best management practices through a voluntary certification program that will allow expedited and less expensive interstate shipments of plant material,” Schmale explained.

Eight “pilot nurseries” from across the country are currently beginning their participation in the program, which is being developed by APHIS, the Plant Board, SAF and AmericanHort.