Sick-Day Excuses: Grandma Poisoned Me, the Doctor Prescribed the Beach 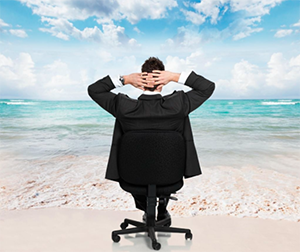 Ever have an employee ask to take a sick day because her doctor said the beach would be good for her vitamin D deficiency? Or because she had no clean underwear?

Those are among the excuses that workers gave their managers for taking sick time, according to a new survey commissioned by CareerBuilder, as reported by Dana Wilkie, the online editor/manager for the Society of Human Resource Management.

More than one-third of employees surveyed — 38 percent — said they called in sick in 2015, even though they felt well, up from 28 percent in 2014. Of those employees, about 1 in 4 said they had a doctor’s appointment, just didn’t feel like working or needed to relax. About 1 in 5 said they needed to catch up on sleep, and just over 1 in 10 blamed bad weather.

In fact, the winter “blues” seem to encourage workers to stay home. The most popular months for employees to call in sick, according to the survey, are December (20 percent), January (15 percent) and February (14 percent).

The holidays also seem to encourage people to call in sick. Respondents who faked being sick during the holidays said they did so to spend time with family and friends (68 percent), shop for the holidays (21 percent) or decorate for the season (9 percent).

The survey found that some of the stranger excuses for staying home included:

Those “creative” excuses didn’t translate into ironclad alibis, especially in the age of social media: One-third of employers said they’d caught an employee lying about being sick by checking social media. Other ways that employers checked up on employees was by asking to see a doctor’s note and calling the employee. More than 1 in 5 employers (22 percent) said they’d fired a worker for calling in sick with a fake excuse, an increase from 18 percent in 2014.

So, what’s a concerned employer to do? Rather than entirely laughing off absurd excuses, it may be time to look at your leave policy, said Rosemary Haefner, CareerBuilder’s chief human resources officer.

More than half of the workers surveyed had paid time off programs that allowed them to take time off for any reason, yet 27 percent of these employees said they still felt obligated to make up an excuse — often by pretending to be sick — when they took a day off. Many of those who felt this pressure — 32 percent — were ages 18 to 34, compared with 20 percent of those who were 55 or older.

“Inflexible scheduling may put an employee in the position of having to fake a cold and take an entire day off when he or she only needed a few hours to take an elderly parent to a doctor’s appointment,” said Haefner.