Deck those halls, trim your trees and get your web site and social media pages holiday-ready: Analysts are predicting this holiday season could be a strong one for retailers. But business owners will face stiff competition, and a shifting landscape regarding how and when consumers are shopping.

According to the latest research from the consulting firm Deloitte, Americans will spend “$369 over the Thanksgiving weekend, nearly 25 percent more than last year.”

As reported in Market Watch, the research also found that “57 percent of people plan to shop over the weekend, with 59 percent of those shoppers saying they’ll shop online, up from 52 percent in 2014.”

Which is not to say that your customers are necessarily waiting for Thanksgiving to come and go before stocking up on stocking stuffers.

In fact, the National Retail Federation reports that 60 percent of holiday shoppers have already started checking items off their lists. The group predicts overall holiday spending will be “comparable” to last year, with retail sales rising 3.7 percent and consumers spending an average of $805 on holiday merchandise; they spent $802 on average last year.

At least one high-profile company, Credit Suisse, says a significant shift in the holiday shopping season may be underway this year: A less important role for Black Friday.

The “traditional start of the holiday shopping season is ‘losing its luster’ as promotions extend over a longer period of time,” according to Market Watch. Credit Suisse “believes this year will be tempered by weakening mall traffic trends, consumer spending’s shift away from apparel and towards higher-priced goods such as vehicles, and elevated inventory levels that are cause for gross margin concerns. Online sales will continue to take share from brick-and-mortar stores, the bank wrote, which puts retailers with a strong e-commerce presence in a good position.”

The bank isn’t the only organization souring on Black Friday. Earlier this fall, the outdoor clothing and equipment store REI made headlines for its decision to “opt out” of the day.

If Black Friday does lose some of that luster this year, the change will be one of many in the history of how consumers shop and spend money around Thanksgiving, a holiday that once was a big event for many florists. In more recent years, florists have complained of a sizeable drop in sales, as more consumers pick up centerpieces and décor items at supermarkets and big box stores or choose to host more informal gatherings.

Last year, nearly 44 percent of survey respondents to an SAF holiday survey said Thanksgiving sales declined compared to 2013 results. About 22 percent said they experienced an increase; for most of the remaining florists, results were flat.

“Nothing seemed to work,” said one Ohio florist, voicing the frustration of many.

Instead of showcasing a handful of showstopper designs, last year, Lyons and her team at Dandelions Flowers & Gifts in Eugene, Oregon, “offered groupings of smaller, lower vases” — think three-inch tall cylinders — “that could be purchased individually or in groups of two, three or four, depending on the table size,” Lyons explained. Each design retailed for $20 to $25. 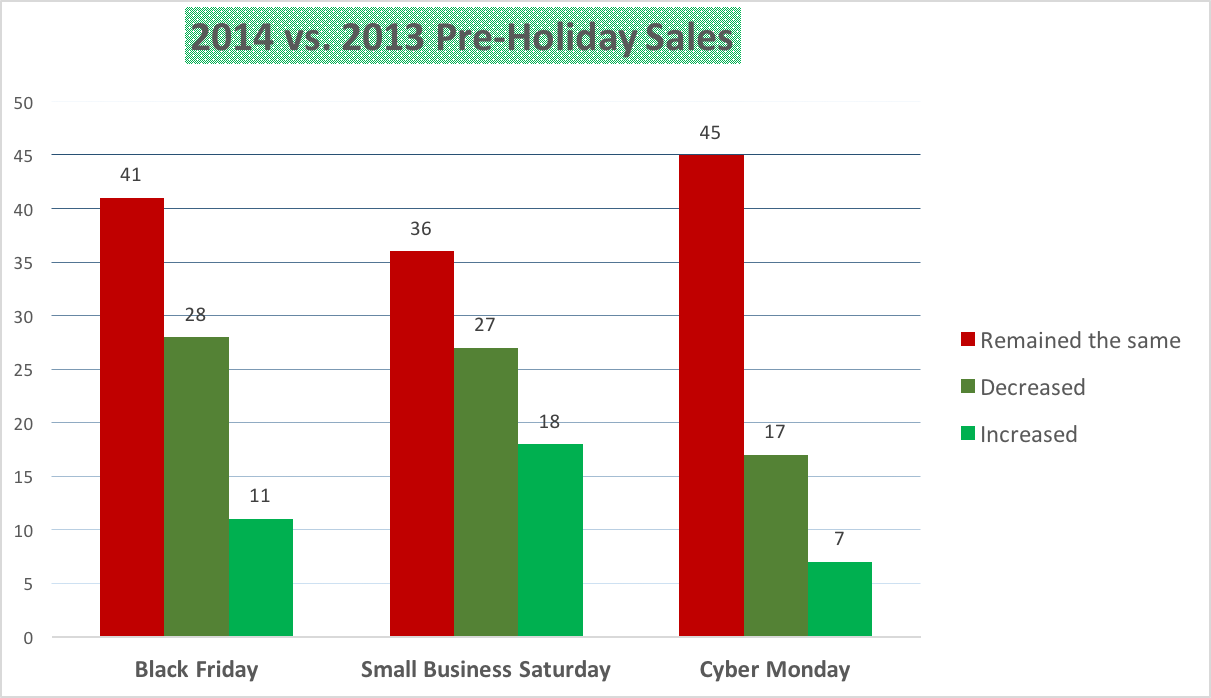 Lyons showcased them in the cooler on a colorful placemat with candlesticks and pumpkins and through an in-store table display that included a table runner and candles, along with other Thanksgiving merchandise available.

The shop launched a similar effort for Christmas but saw better results for Thanksgiving, Lyons said, perhaps because the latter is the bigger “family gathering” event, “at least in our area,” Lyons explained in the November issue of Floral Management magazine.

Other highlights from the SAF survey indicate that many florists saw 2014 results about on par with 2013 returns for the season’s other shopping day events:

This year, many florists have been promoting their small business bona fides. Shelley’s Flowers & Gifts in Waldoboro, Maine, sent an email blast to customers with enticing deals ($5 off purchases of $25 or more and free gift wrapping) and welcoming language that reminded recipients of the business’s hometown roots (along with the hashtag for Small Business Saturday, #ShopSmall.) You can still be part of Small Business Saturday: Check out the effort’s Facebook page, on Twitter (@ShopSmall) or visit the main site for information, tips and resources, including powerful verbiage on the benefits of small businesses to local communities. (Sample gems: “For every year over the last decade, 60 to 80 percent of new jobs were generated by small businesses,” and “For every $100 spent at a local small business, $68 returns to the community.”)

Finally, if you haven’t decorated in-store yet, you’re likely in the minority among florists—even though some high profile brands, including Nordstrom, pointedly hold off on red and green and Christmas trees until after Thanksgiving. Last year, about 50 percent of surveyed florists reported having holiday décor up in November, before Thanksgiving. About a quarter decorated earlier, in September and October, and about 23 percent waited until after Thanksgiving.